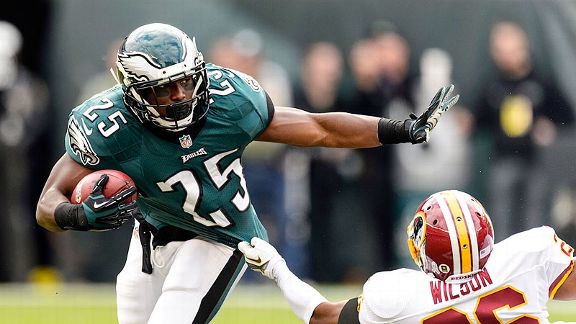 After leading the NFL in rushing yards this past season, LeSean McCoy was projected to be one of the top fantasy football running backs again in 2014; however, with the Philadelphia Eagles sending a fifth round draft pick to the New Orleans Saints to acquire speedster Darren Sproles, McCoy may not be able to gain as many yards as he did last season. McCoy had a phenomenal season in 2013 leading the NFL with 1,607 rushing yards, adding another 539 yards through the air, and finishing with 11 total touchdowns; however, the addition of Sproles might threaten some of these numbers.

Sproles is an interesting player: he can be a running back, Wide Receiver, or return man and put up huge numbers in all three aspects of the game. Although Sean Payton preferred to put Sproles in motion and use him as a receiver in New Orleans, Eagles Head Coach Chip Kelly has already assured everyone that Sproles will be lining up in the backfield this season and that he will be a running back first and a receiver second. This could definitely impact how much McCoy sees the ball. McCoy’s large numbers last season were partially due to the amount of touches Kelly gave him: 314 rushing attempts and 52 receptions. However, you have nothing to worry about when it comes to McCoy; he is still projected to be a top five fantasy running back. 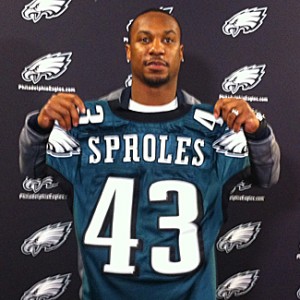 The first thing to remember is that there is plenty of yardage to go around in Kelly’s explosive offense, especially with Desean Jackson leaving and signing with the Washington Redskins. Jackson’s absence will leave a lot of receiving yards to go around. Sproles is a great player, and Kelly will find plenty of uses for him besides rushing; so don’t expect McCoy to drop below 300 carries for the season. Sproles is most dangerous when he’s put into motion out of the backfield, so despite what Kelly is saying now Sproles will most likely end the season with more receptions than carries just as he did the past two seasons in New Orleans. If that’s the case, Sproles will at most take away a few receptions from McCoy; but McCoy should still see no less than 40 receptions this coming season.

The main reason that McCoy is expected to maintain his high fantasy value in 2014 is Coach Kelly. In his first season as the Eagles Head Coach, Kelly turned the Eagles offense into a well-oiled machine. Kelly’s offense was one of the most efficient and effective in the league, and Sproles will only make an already explosive offense even more dynamic. Kelly will no doubt find a way to utilize Sproles while preserving McCoy’s large role in the offense. Quarterback Nick Foles isn’t exactly a runner like Michael Vick was, so McCoy may have even more carries than last season despite losing some to Sproles.

The area in which Sproles will most affect McCoy is touchdowns. Sproles’s presence in the backfield threatens to take away a few touchdowns from McCoy, both rushing and receiving; however, if McCoy can maintain the same level of productivity in the running game that he had last season, he’ll earn plenty of points for his fantasy owners through high yardage. McCoy will most likely finish fourth out of all fantasy running backs behind Adrian Peterson, Jamaal Charles, and Matt Forte. If you have a high first round draft pick in your league, I would recommend trying to grab one of these three; however, using a late first round pick on McCoy would not be a waste. Coach Kelly should have no problem finding a way to keep McCoy in the top five running backs in the NFL, but only time will tell how much of an impact Sproles will have on McCoy’s numbers in 2014.

For more NFL news and updates, visit Fantasy Football Overdose today. You can also get updates via Facebook and Google+.