While Henry Josey has not stolen anyone’s roster yet, if he shows well in the remaining two weeks of the preseason, he will be taking someone’s job and landing on a 53-man roster. 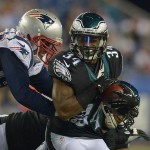 Henry Josey, a small, quick-footed running back, was able to exploit tiny holes with his speed in the second pre-season game against the New England Patriots.

But it wasn’t just his speed that impressed.

He made reads, picked the right hole, and followed his blockers down field, which we got to see a few times as he often found himself past the front seven of the New England defense.

The level of skills displayed is far beyond what you would expect from the undrafted rookie free agent out of Missouri. He looked like a younger, more explosive, version of Darren Sproles as he made his cuts and caught passes out of the backfield.

This type of speedy, dynamic, play is a great fit for the Philadelphia Eagles and Chip Kelly’s explosive offense for all the reasons you hear of how Darren Sproles will be contributing in the 2014 season.

The big question now, and one Howie Roseman and the Eagles’ staff will have to answer in the remaining two preseason games, is can Josey prove his value over the other running backs to get on the 53 man roster.  I’m high on him now, but need to see him against better opposing talent, before he kicks someone to the practice squad for week one.  Behind LeSean McCoy and Darren Sproles on the depth chart are Chris Polk, Matthew Tucker, David Fluellen, and this exciting new talent that won’t last long on the waiver wire, should he get there.